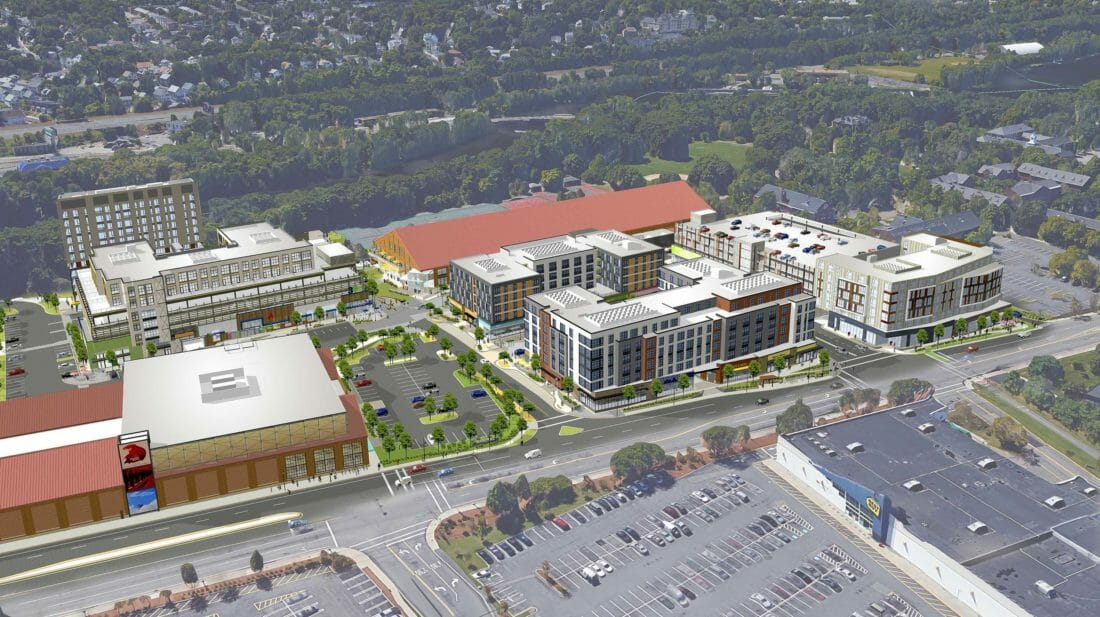 The Watertown Planning Board  gave a 5-0 vote of approval to Arsenal Yards, a vibrant new development with a mix of uses at the former Arsenal Mall in Watertown being planned by Boylston Properties and The Wilder Companies.

Arsenal Yards, a name recalling the proud part this East End of Watertown played as a commercial hub over almost two centuries, is a redevelopment and expansion of the former Arsenal Mall, more recently known as The Arsenal Project. The mixed-use development will feature 350,000 square feet of retail and entertainment, about 500 residences, and 100,000 square feet of existing office space.

After 90 minutes of discussion and comment by Planning Board members, Watertown Planning staff, Town Council members, and many neighbors and residents of the area, the Board approved a Special Permit for the Arsenal Yards master plan. Boylston Properties and The Wilder Companies plan to begin construction in six to eight months.
Discussion at the last night’s meeting focused on the considerable tax benefits, shopping and entertainment opportunities, and additional housing that Arsenal Yards will bring to the town.

Town Council Member Vincent J. Piccirilli, Jr. noted that planning by the Town and the development team to revitalize this area and improve a portion of East Watertown has been going on since 2009. “It has been a long process,” he said just before the vote. “This will transform the area … for the 21st century.”

Arsenal Yards will feature eclectic and authentic retail, locally curated shopping and dining opportunities, comfortable open spaces, a specialty grocer, a cinema and entertainment lounge, and many other attractive amenities, designed as a neighborhood hub with residents of Watertown and neighboring communities in mind.

“This new community in Watertown’s East End will bring vibrancy of the city and an urban energy along with the convenience and green spaces of a suburb,” Bill McQuillan, Principal of Boylston Properties, said. “We’ve worked with Watertown residents and officials to bring a unique constellation of uses with today’s busy families and individuals in mind.”

Arsenal Yards, established in 1816 by the U.S. Army as an ordinance depot and small arms factory, served multiple defense functions over the years and ceased operations in 1968. The complex underwent conversion into a covered shopping mall with acres of open parking in the early 1980s.

Handsome historic portions of the original manufacturing complex will be retained, with creative architectural additions, respectful restoration, and sustainability as priorities. The architect for Arsenal Yards is Prellwitz Chilinski Associates, Inc. of Cambridge.

It will be welcoming and highly accessible for bicyclists and pedestrians but have sheltered parking for those who drive or live there.

The creators and developers of Arsenal Yards are investing millions of dollars in infrastructure improvements to transform the extensive paved surfaces and aging intersections. The improvements will include the city’s own Arsenal Park, an adjacent space with greater potential for public enjoyment located between the development and the Charles River. A town-led group will be formed soon to work with the development team to create a reimagined Arsenal Park that will suit the town and all its intended users.

With housing in the region, including Watertown, in short supply, Arsenal Yards will create 428 new market-rate residences and 75 affordable apartments.

A destination, not a mall, and unlike any other retail destination in the region, it will have half a dozen chef-driven restaurants, a specialty grocery, a premium wine “superstore,” a cinema with 6-8 limited-seating screens, active entertainment, and a combination of boutiques and national retailers. Arsenal Yards will feature Zipcar, EV chargers, and the latest in “smart parking” technology.

The completed project, over phases, will contribute significantly to Watertown’s tax base, approximately doubling the tax revenue from the current amount paid to the town.