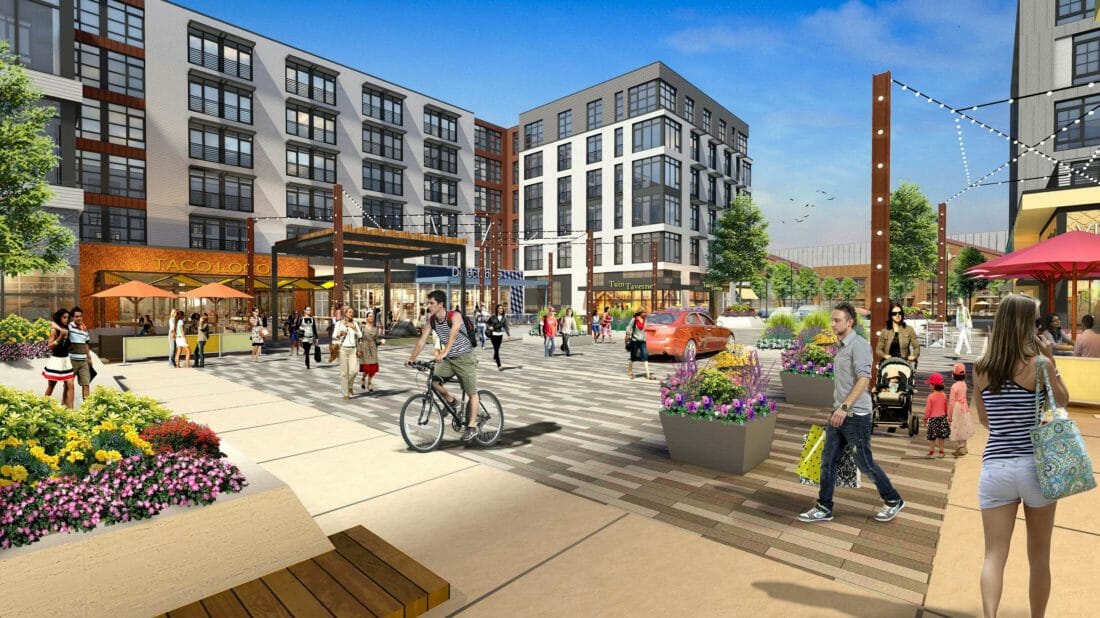 Boylston Properties, The Wilder Companies, and partners today announced plans for Arsenal Yards, a vibrant new development with a mix of uses at the former Arsenal Mall in Watertown.

Arsenal Yards, a name recalling the proud part this East End of Watertown played as an industrial hub over almost two centuries, is a redevelopment and expansion of the former Arsenal Mall, more recently known as The Arsenal Project. The mixed-use development will feature 350,000 square feet of retail and entertainment, about 500 residences, and 100,000 square feet of office space.

Arsenal Yards will feature eclectic and authentic retail, locally curated shopping and dining opportunities, comfortable open spaces, a specialty grocer, a cinema and entertainment lounge, and many other attractive amenities, designed as a neighborhood hub with residents of Watertown and neighboring communities in mind.

“This new community in Watertown’s East End will bring vibrancy of the city and an urban energy along with the convenience and warmth of a suburb,” said Bill McQuillan, Principal of Boylston Properties. “We’ve worked with Watertown residents and officials to bring a unique constellation of uses with today’s busy families and individuals in mind.”

“Arsenal Yards is an all-in-one neighborhood destination for active people looking for the perfect place to meet up with friends and neighbors, take in a movie, grab groceries, share a drink, meet for breakfast or lunch, or settle in for dinner,” McQuillan said. “After all, Watertown is where Cambridge and Boston come together.”

Andrew T. LaGrega, Principal at The Wilder Companies, called Arsenal Yards a “game changer.” “From the first announcement of our acquisition, retailers, restauranteurs, and theater owners have reached out to us, because they see a real opportunity in Watertown, with its proximity to Boston, Cambridge, and the suburbs,” he said. “We pride ourselves on assembling the best merchandise mix to serve each market, and we look forward to creating a special place at Arsenal Yards.”

Planning of the new community was undertaken over the last two years with extensive involvement of the Watertown community, as well as city agencies and officials.

Arsenal Yards, established in 1816 by the U.S. Army as an ordnance depot and small arms factory, served multiple defense functions over the years and ceased operations in 1968. The complex underwent a utilitarian conversion into a covered shopping mall with acres of exposed parking in the early 1980s.

It was an automobile-centered complex designed for shop-and-go, popular in the final decades of the 20th century but less suited today to shoppers who prefer destinations that incorporate entertainment and dining.

Handsome historic portions of the original manufacturing complex will be retained, with creative architectural additions, respectful restoration, and sustainability as priorities. The architect for Arsenal Yards is PCA of Cambridge.

It will be welcoming and highly accessible for bicyclists and pedestrians but have sheltered parking for those who drive or live there.

The creators and developers of Arsenal Yards envision transforming a location with extensive paved surfaces, aging intersections and sewers, investing millions of dollars in street, water, drainage, transit, and landscape improvements, including the city’s own Arsenal Park, an adjacent space with greater potential for public enjoyment between the development and the Charles River.

With housing in the region, including Watertown, in short supply, Arsenal Yards will create 428 new market-rate residences and 75 affordable apartments.

A destination, not a mall, and unlike any other retail destination in the region, it will have half a dozen chef-driven restaurants, a 30,000-square-foot specialty grocery, a premium wine “superstore,”  a multiplex cinema and 6-8 limited-seating screens, active entertainment, and a combination of boutiques and national retailers. Arsenal Yards will feature Zipcar, EV chargers, and the latest in “smart parking” technology.

The Arsenal Mall was renamed The Arsenal Project for the planning period after the 2013 purchase by Boylston, Wilder, and partner Jonathan Bush. Arsenal Yards will have not only additional retail and apartments but also will encompass the larger site between Arsenal Street and the Charles River/Arsenal Park. Total development will reach over one million square feet, including One Arsenal (to the east) and Harvard Vanguard medical offices (to the west). Home Depot and Golfsmith space occupy about 160,000 additional square feet at the Arsenal Yards location.

Demolition of the one-story portion (an addition) of the historic building will begin in the spring, with the first stores opening in Fall 2018.

The completed project, over phases, will contribute significantly to Watertown’s tax base, approximately doubling the tax revenue from the current amount paid to the city.